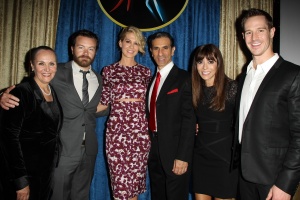 The Human Rights Hero Awards was held on March 24, 2014 at Eva Longoria’s restaurant Beso in Hollywood. The event was produced and hosted by Marisol Nichols in partnership with Youth for Human Rights International (YHRI). The purpose of the event was to raise awareness about modern day slavery and the commercial sexual exploitation of children, on a global level as well as here in the United States, by awarding organizations and individuals that are doing heroic work in this field. 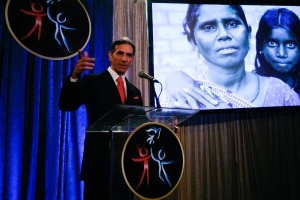 The work that Mr. Enzo di Taranto has done as a senior official of the United Nations worldwide, stands as a substantial testament of his action and deep commitment to human rights globally. After conducting global campaigns and peace-building initiatives in Africa, Asia, Europe, Latin America and the Caribbean -- including, Mozambique, Laos, Kosovo, and Haiti, he moved to headquarters in New York where he stepped up to the helm of "Action II" -- a global United Nations program on human rights. Other assignments have included serving as the Head of Governance of UN Volunteers in Germany, as the Manager of the UN Secretary General’s Campaign to End Violence Against Women; and currently as Senior Vice President of the World Leaders Forum Dubai. 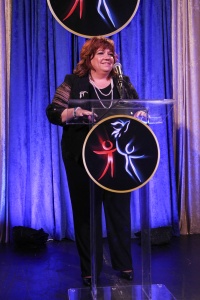 Dottie Laster, is a practitioner of Immigration Law and was selected by the U.S. Attorneys Office to be certified by the Department of Justice to train law enforcement and others on trafficking. In her very first case, she rescued a 16-year-old girl from a commercial sex trafficking ring and this led to the rescue of another 120 victims. That case led to five prosecutions including one of the staff that was the “in house abortionist”. Dottie shared her personal success stories and briefed our audience on what to look for and how to identify evidence of human trafficking in our own communities.

Our first awardee, Andrea Powell co-founded FAIR Girls in 1998 at her kitchen table, drawing inspiration from a 19 year old friend who had been sold into slavery by her parents. Fair Girls is based in Washington DC and has offices globally including Bosnia, Serbia, Russia and Uganda. Their programs reflect a deep investment in working with each of the over 500 girls that they serve every year. They provide long term assistance, counseling, education, legal support, and more to help these survivors build a future for which they can excel. Just as the word FAIR implies -- Free, Aware, Inspired and Restored. 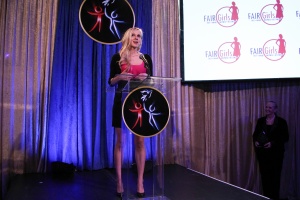 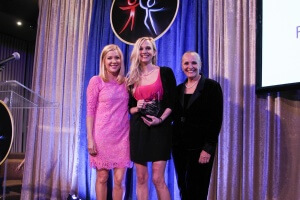 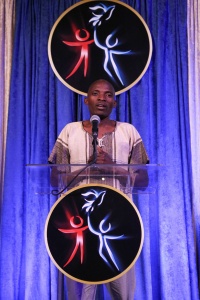 Our next Human Rights Hero Award went to Jane Ekayu, The Founder of Children of Peace Uganda. An estimated 66,000 children have been forcibly abducted and recruited into the Ugandan guerrilla militia known as the Lord’s Resistance Army during its two-decade long insurgency in the northern region of Uganda. Two-thirds of these children were severely beaten, a fifth were forced to kill, and nearly 10 percent were forced to murder a family member or friend to bind them to the group. Children of Peace Uganda works with these survivors.

This non-profit organization is dedicated to the well-being and long-term care of former child soldiers, children born in captivity and children orphaned by the war. The prolonged challenges the children face are trauma, lack of education and economic security, physical health complications and community ostracism. Mr. Tony Okello, world-class competitive runner and International Spokesperson for Children of Peace Uganda, was there to accept the award on behalf of Jane Ekayu. 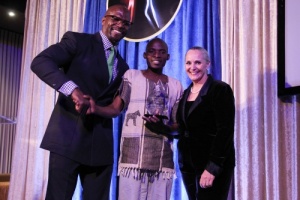 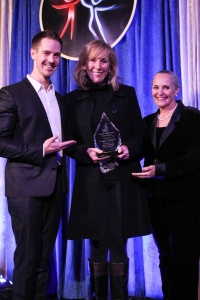 Peggy Callahan’s sense of fairness has propelled her work as a television journalist and anti-slavery activist. She co-founded Free the Slaves, one of the leading anti-slavery organizations on the planet, and set about using her television skills to help build a movement to end slavery. As one part of her work, she created the world’s largest film library on modern-day slavery and executive produced 28 films on modern-day slavery. As such, she is regarded as the world's premier filmaker on the subject. In 2012 she co-founded Voices 4 Freedom. Voices 4 Freedom informs and inspires people to end slavery. Each of their programs is designed to get real, measurable help to people who are enslaved, enabling them to find a path to sustainable freedom and help eradicate the conditions that cause slavery in the first place. 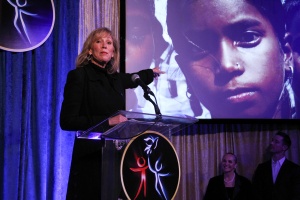